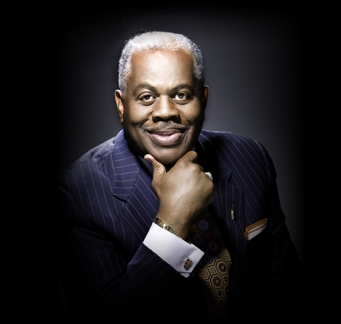 From as far back as he can remember Willie Watkins’ life has been immersed in end of life rituals. He has, in fact, been a lifelong student of mortality. Frequenting funerals as a young boy in rural Georgia, later becoming a licensed funeral director and embalmer, and ultimately proprietor of Atlanta’s busiest mortuary, Watkins has likely spent as much time in the presence of the deceased as he has among the living. He is equally comfortable in either realm, celebrating both life and death with a trademark style, equanimity and sincerity.

There’s not much difference in the little boy growing up in Scottdale, Georgia under the doting and watchful eye of his grandmother, and the man who is a mortuary mogul today. Born with a personality as big as his heart, Watkins has always cared about making people happy, always worked hard to excel, and always exhibited an impeccable flair for fashion.

Young Willie would dress in his Sunday best to accompany his grandmother, known around town as Mother Guinn, on her weekly funeral rounds after church. The tiny town was a close-knit community where everyone knew everyone and every passing was duly noted. While making funeral drop-ins, sometimes to several services in a day, his grandmother would comment on the deceased’s appearance, saying how good so-and-so looked. To the six year old boy they merely looked asleep, but the experience made an indelible impression on him. He realized that seeing the dearly departed appear to be at peace in the casket gave comfort to those left behind to grieve their loss.

While most young people fear death, Willie’s first job, at about eight years of age, not surprisingly, put him in contact with the deceased. Already showing powers of persuasion, the precocious boy talked his way into a job putting flowers alongside hearses for Cox Brothers Funeral Home in Scottsdale. Occasionally he was allowed to ride in the back seat of the funeral car. On one such occasion, Willie experienced what can only be described as a calling, in which a voice spoke to him saying “this is what you need to do.” From that moment on, his purpose in life was clear.

Even after his parents moved their growing family to the city of Atlanta, Willie would insist on traveling back to Scottsdale every week-end to escort Mother Guinn on her appointed funeral rounds and place flowers at Cox Brothers. The first paper he wrote in elementary school was about becoming an undertaker. At about 12 years of age, his parents allowed him to ride the bus to Scottdale on Sundays, never wanting to shirk his responsibilities.

The oldest of ten children, this son of a school teacher and business owner was expected to follow in his father’s footsteps, to take over his shoe repair business. But the young man had other plans. The day came when Willie had to tell his dad he was following his own dreams.

One day after school, Willie, who never strayed far from his dream, walked across the street from his high school to approach the owner of Thornton Mortuary for a job. The teen presented himself as a responsible, hard-working young man with plans to prepare for a career in mortuary science. While the owner was at first somewhat ambivalent about the brash young man, his wife, appreciating the youngster’s perseverance, asked him to come back to work the next day.

Filled with enthusiasm and excitement, Willie showed up after school the next day, and the next, and everyday throughout high school. He would eventually move in to live in the mortuary. There he learned the heart and soul of the business, embalming, setting features, mixing fluid and massaging it into body cavities. What might seem gruesome and morbid to most teen-agers, was absolutely fascinating to Willie. He eagerly pursued any opportunity to learn every facet of the business. Willie would go on to assume responsibility for the hands-on, day-to-day operations, even driving funeral cars before he was licensed to drive, all while excelling as a student and member of his high school football team.

Following the lead of his personal heroes Martin Luther King, Jr. and Maynard Jackson, upon graduating from high school with honors, Watkins enrolled at Atlanta’s historic Morehouse College to study business administration. With his academic achievement intact, and the job with Thornton Mortuary thriving, Watkins made a bold move in his sophomore year at Morehouse. Word that a new mortuary college had opened in downtown Atlanta appeared as a sure sign on the horizon. “It was hard telling (Pres) Benjamin Mays that I was leaving Morehouse,” Watkins recalls, “but I knew I had to follow my calling.”

Watkins enrolled in the first class of Gupton Jones Mortuary College, where he later earned an Associate’s Degree in Mortuary Science in 1970. While in school, he continued to intern at Thornton Mortuary, where he had become an integral part of the business. He also got a job working as a loan officer with Citizens Trust Bank to pay for tuition. In 1971, Watkins was licensed as a funeral director and embalmer.

After graduation, Watkins went to work as Caldwell Banker’s first African American mortgage loan officer, where he would go on to become the top sales agent in the industry, selling $15-20 million in home mortgages a year. Meanwhile, he figured out a way to earn money doing what he loved most. Watkins negotiated an agreement with the owner of Thornton Mortuary to earn commission on any new business he brought to the funeral home.

After entering into partnership with several businessmen to operate Crestlawn Funeral Home in Decatur. “It was before it’s time,” Watkins says, describing the big, opulent funeral home. When the business eventually failed amid a crumbling partnership, Watkins knew it was time to become master of his own fate. “I realized,” he says candidly, “I can’t ride someone else’s back to success.”

The opportunity came when he was 29 years old. A commission he earned from the sale of a big commercial property put him in position to buy a spacious craftsman style home in the Historic West End District of Atlanta. At the time, the building housed a dental practice. The owner was persuaded to sell and, in 1978, Watkins purchased the building that would become the nucleus of an expansive mortuary business empire.

While struggling to build the mortuary, Watkins bought his signature flower car and a hearse, and used the two limousines as transportation for dignitaries visiting Atlanta. A. Watkins Limo Service financed his fledgling funeral business, until Watkins decided the time had come to stop hedging, and to step out in a leap of faith.

The launch of Willie A. Watkins Funeral Home, Inc. on December 7, 1982 was the realization of a lifetime ambition and fulfillment of his personal passion. As the franchise has gradually expanded over the years, now totaling four locations, Watkins has maintained the simple down-home charm and meticulous attention to detail that defines his brand.

Customers visiting the elegantly appointed Tudor style mansion in the heart of the Historic West End experience a setting more like home than funeral home. The parlor is a fine arts gallery of marble floors, crystal chandeliers, glass inset doors, upholstered seating, original paintings and large ornate mirrors set above handcrafted wainscoting. Birds sing sweetly from their perch in large cages, while a grand piano stands at attention. Every location is impeccably designed to make guests feel comfortable at a time when they are perhaps most ill at ease. Watkins makes frequent appearances, warmly greeting guests as if they were old friends.

Personal service, the hallmark of his business, sets Watkins apart in a highly competitive industry. “I never want to seem too busy for customers,” he says. He sets the example of personal attention that he demands of everyone who works in his organization. Despite a hectic schedule, Watkins makes it a point to attend most services they conduct, whether he knows the deceased or not, acknowledging the family, and presenting a plaque in memory of their loved one. He phones every family personally to offer his condolences.

With the philosophy that a funeral service is more a celebration of life than a mourning of loss, he has developed a widely recognized signature style that is uniquely Willie Watkins. “We plan a service,” he explains, “that the family can remember with fondness.” He became the first in the area to release doves as a symbolic gesture of releasing the spirit to the heavens. In addition to his signature flower cars, Watkins offers black cars with silver tops, and horse drawn carriages for the processional. His funeral directors wear top hats and tails. It’s all designed to give the family a memorable experience.

Watkins has experienced his own share of loss. His mother, who insisted he always have a live person answering the phone, worked in the business up until her passing a few years ago. Photos of her hang prominently throughout the West End parlor as a constant reminder of her contributions to the business and the community. His father also died recently. Knowing the inevitability of death, Watkins has contemplated his own mortality. He has envisioned a funeral in which his body will lie in state, fully exposed, in a silver casket with black velvet interior. He insists on having his attire changed five times. “Death is inevitable,” he says, “but I know there is life after death.”

A passion for service and compassion for others has made Watkins the busiest mortuary in Atlanta, serving more than 800 customers a year. Whether catering to the family of a dignitary like Coretta Scott King, or to the common man, every client is treated with equal dignity and respect. Watkins gives back to the community in myriad ways. He is an active participant on numerous boards and organizations. One of the many ways in which he enjoys showing his appreciation to the community for its support is with big community festivals. The biggest such event has become an annual favorite. Each year on Memorial Day, he hosts an Annual Community Day, providing food, drinks and entertainment attended by more than 3,000 members of the community.